Helicopter History, Part 1: A General History of the Helicopter 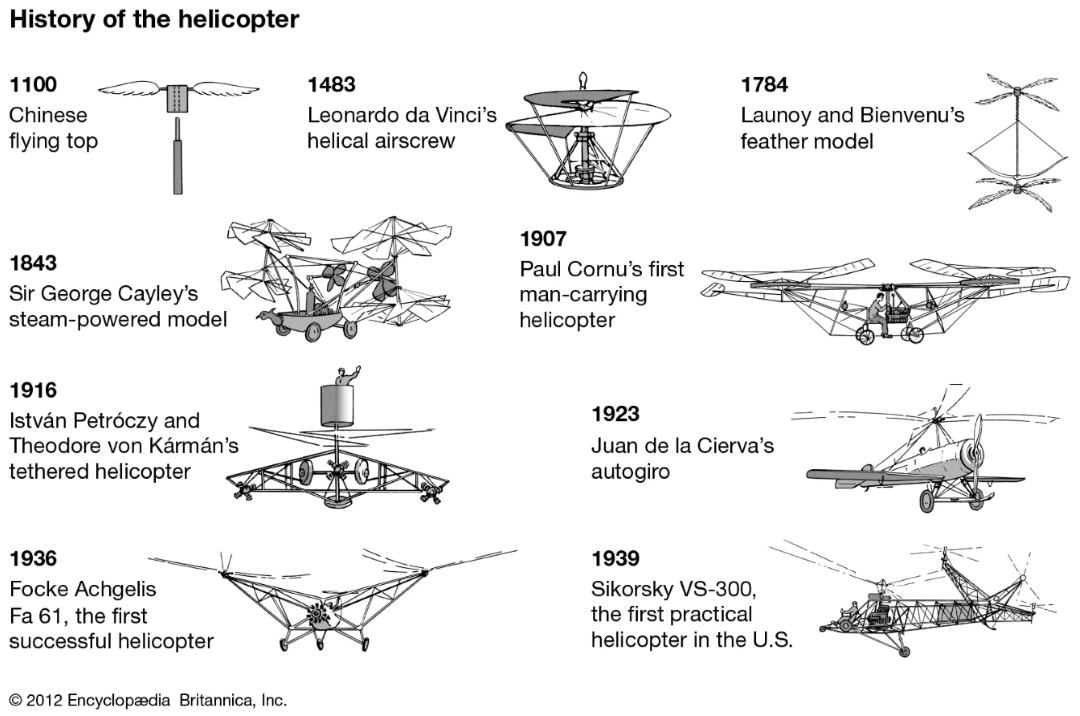 Modern helicopters are one of the most impressive feats of engineering, but have you ever wondered how we got to where we are today? Since the mid-1800s, helicopters have come a long way in terms of design, functionality, and popularity—with a wealth of significant milestones along the way.

In this first of two parts, we’ll take a brief look at general helicopter history—from the early origins of vertical flight to the wacky yet innovative offshoot designs. We’ll also discuss some surprising helicopter facts and the impact of rotorcraft on the world at large. Let’s begin.

THE EARLY ORIGINS OF VERTICAL FLIGHT

Although helicopters are considered more of a modern invention, the idea behind their spinning rotors can be traced as far back as 12th century China, where a device known as the “flying top” was conceived. This toy consisted of a spinning bamboo top with feathers attached to its blades, which when spun, allowed it to stay aloft for short periods of time. While the flying top was mostly just a fun toy for children, it did pave the way for later inventors with bigger aspirations.

In 1483, famed renaissance man Leonardo da Vinci sketched out a design for a helicopter-like device that he called an “aerial screw.” Da Vinci’s design was never built, but it did show that the concept of vertical flight was beginning to take shape in the minds of inventors around the world.

Over 300 years later, two French artisans—a naturalist named Launoy and a mechanic named Bienvenu—created a small toy helicopter that was very similar to da Vinci’s design. This toy was made out of a cork, some wire, and two propellers made from bird feathers. When spun, the toy hovered in the air for an extended period of time, giving many people their first taste of vertical flight. Little did they know there would be far more impressive breakthroughs right around the corner.

In 1841, another inventor named Henri Giffard built the world’s first powered helicopter. His machine was called the “Giffard Helicopter” and it consisted of a steam-powered engine that turned a large screw-like propeller. The Giffard Helicopter could only lift itself a few feet off the ground and it never went into production, but it did prove that a powered helicopter was possible.

Sir George Cayley, often referred to as the “father of aviation,” was also working on his own helicopter design around this same time. In 1843, he created a model helicopter that used an intricate system of pulleys and weights to get the rotors to turn. Unfortunately, Cayley’s design was too complex and it never worked as intended.

Twenty years later, in 1863, another inventor by the name of Etienne Oehmichen built and flew the first successful powered helicopter. His machine, which he called the “Oehmichen No. 2” was similar to the Giffard Helicopter in that it used a steam-powered engine to turn two large rotors. Unlike the Giffard Helicopter, however, the Oehmichen No. 2 could reach altitudes of up to 10 feet and stay aloft for up to one minute at a time. This made it the first practical powered helicopter in history.

The Oehmichen No. 2 taking flight

THE RACE FOR HUMAN FLIGHT

It wasn’t until the early 1900s that the first human-carried helicopters began to appear. In 1907, French aviator and inventor Paul Cornu became the first person to achieve vertical flight when he flew his self-designed helicopter for a distance of 20 feet (6 meters). His machine was very similar to Giffard’s design, but it used two large contra-rotating rotors instead of one large propeller. Unfortunately, it was very unstable and could only stay in the air for brief periods of time. Even so, it was considered a major milestone in aviation.

That same year, two French brothers by the name of Jacques and Louis Breguet built and flew another successful human-carrying helicopter. Their machine, called the “Gyroplane No. 1”, used two large rotors that were powered by a 24-horsepower engine. It could carry a single person for short distances and reach altitudes of up to 15 feet (4.5 meters).

Less than a decade later, in 1916, István Petróczy and Theodore von Kármán became the first people to fly a helicopter for an extended period of time. Their machine, called the “Petróczy- Kármán Gyroplane”, used two large rotors that were powered by a 50-horsepower engine. It could stay in the air for up to 15 minutes and reach altitudes of up to 3,000 feet (915 meters). Interestingly enough, the design was the first to seat the pilot above the rotors in a small box, similar to a crow’s nest at the top of a ship’s mast.

THE INNOVATIVE OFFSHOOTS IN HELICOPTER HISTORY

In 1923, Juan de la Cierva, a Spanish aviator and inventor, designed and flew the first hybrid helicopter/airplane. His machine was called the “Autogiro A-1” and it used a single large rotor to provide lift while a small propeller at the front of the machine provided thrust. The Autogiro A-1 couldn’t fly vertically or hover like a helicopter, but it could take off and land without the need for a runway. This made it much safer and easier to fly than any other aircraft of its time.

In 1930, de la Cierva teamed up with British engineer Harold Pitcairn to further develop his Autogiro design. Together, they created the “Pitcairn PCA-2 Autogiro”, which was the first helicopter to successfully fly using autorotation. This meant that if the engine failed, the rotor would continue to spin and provide enough lift for the machine to safely land. The PCA-2 was also the first helicopter to be mass-produced, with over 50 machines being built.

In 1936, German engineer Heinrich Focke designed and flew the first successful coaxial rotor helicopter. His machine, called the “Focke-Achgelis Fa 61”, used two rotors that were mounted one above the other on a single mast. This configuration canceled out the torque that is typically produced by a single-rotor helicopter, making it much more stable in flight. The Fa 61 was also the first helicopter to be equipped with an enclosed cabin, making it the first true “passenger helicopter”. 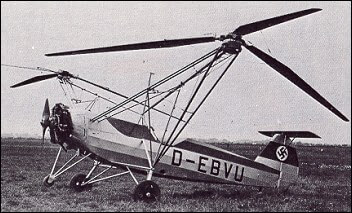 First prototype of the Fa 61

WANT TO KNOW WHAT COMES NEXT?

This brief look at helicopter history was only just the beginning. In part two, we’ll dive into the history of helicopters in the military, from World War II to the conflicts of today. We’ll also discuss what’s in store for the future of helicopters. You won’t want to miss it.

In the meantime, check out our list of the top five vintage helicopters of all time. You can also shop Chopper Spotter’s lineup of premium helicopter tugs for safer and more secure transportation of your aircraft.

Our range of products is designed to help meet the needs of any application, from private owners with a single, lighter helicopter to organizations with a heavy-duty fleet. Request a quote today to start experiencing the ease and maneuverability of the industry’s best ground-handling equipment.