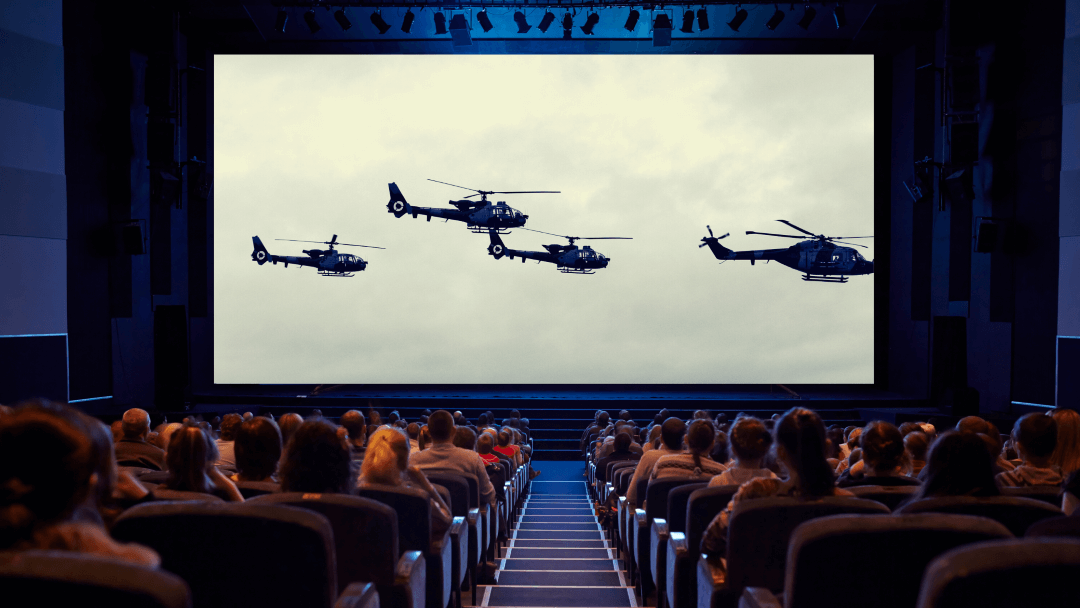 At Chopper Spotter, we’re obviously huge fans of helicopters, and that unbridled enthusiasm naturally extends to the world of film. Any time a chopper graces the screen, we can’t help but get a little giddy, because if our moviegoing experience has taught us anything, it’s that things are about to get really exciting!

Fortunately, Hollywood has provided us with an abundance of helicopters in movies, spanning a variety of different genres no less. Just to be clear, in order to make our list, the movie needs to actually feature a helicopter (sorry, “Helicopter Mom”). So, without further ado, here are our picks for the ten best helicopter movie scenes.

As the only true “helicopter film” on this list, it would be a huge oversight not to include this 1983 action thriller. The plot centers around a Los Angeles police officer who is chosen to test pilot an experimental attack helicopter. Unfortunately, he soon finds out the government’s real intentions for the high-tech chopper, forcing him to do whatever it takes to keep the superweapon out of their hands.

A proper list of Hollywood helicopter scenes wouldn’t be complete without the 2001 blockbuster “Black Hawk Down.” Directed by Ridley Scott, this film stars Josh Hartnett, Eric Bana, and Ewan McGregor, and follows the true story of a group of U.S. soldiers as they attempt to rescue and defend a downed Black Hawk and its crew from advancing Somali forces.

The clip above shows an RPG taking out the tail rotor, causing the helicopter to spiral out of control and land hard, culminating in the namesake line: “We have a Black Hawk down.”

Regarded by many as one of the greatest sci-fi action flicks of all time, this 1991 James Cameron sequel brings back gritty survivalist Sarah Connor (Linda Hamilton) and the legendarily imposing T-500 Terminator (Arnold Schwarzenegger). This time around, the two of them must team up to protect Sarah’s son, John, from the ruthless pursuit of a new-and-improved T-1000 Terminator (Robert Patrick).

In this memorable scene, the T-1000 launches a police motorcycle out of a two-story window, latches onto a police helicopter, and “morphs” his way into the cockpit to give chase to our intrepid heroes.

Featured Helicopter: Eurocopter AS350 B2 Astar (now the Airbus H125)

While far from the best film in the Die Hard franchise, this 2007 action thriller follows reluctant New York cop John McClane (Bruce Willis) as he continues his incredible streak of bad luck by once again pissing off the wrong guy.

Unlike the rest of the scenes on this list, we don’t follow the point of view of the helicopter. Instead, McClane and the young hacker he’s trying to protect (Justin Long) are trapped in a tunnel with no way out. That’s where our hero gets the absurdly brilliant idea to launch a police car into the air, right toward the waiting helicopter.

2017’s “Kong: Skull Island” features a superhero lineup of Brie Larson (Captain Marvel), Tom Hiddleston (Loki), and Samuel L. Jackson (Nick Fury) as they set out to explore a mythical, uncharted island. Little do they know it’s home to the mighty Kong, quickly turning their mission of discovery into a fight for survival.

While King Kong of the 1930s battled biplanes atop the Empire State Building, this more recent—and much more ruthless—incarnation of the great ape takes on an entire fleet of military helicopters in one of the most intense 5-minute sequences in cinema history.

“Outbreak” is a 1995 thriller that may not be as well known as other entries on this list but features an all-star cast of names you’d certainly recognize, such as Dustin Hoffman, Rene Russo, Morgan Freeman, Kevin Spacey, and Donald Sutherland. The plot revolves around a dangerous airborne virus and the team of doctors brought in to control its spread as they race against time to save the nearby town and its residents.

In the featured scene, contagious disease expert Sam (Hoffman) and his pilot, Major Salt (Cuba Gooding Jr.) have captured the host animal but are soon confronted by Major General Donald McClintock (Sutherland) which leads to an exciting helicopter chase through a scenic river valley.

SPOILER ALERT: This scene takes place toward the climax of the film and features Ethan Hunt (Cruise) pursuing the villainous August Walker (Henry Cavill) as their helicopters wind and weave through mountainous terrain. The scene eventually leads to a brutal clifftop fistfight that cleverly incorporates one of the downed choppers to turn the tide of the battle.

We think it’s safe to say that Rambo does not like helicopters. While “Rambo: First Blood” includes a memorable helicopter scene, and 1988’s “Rambo 3” features not one, not two, but THREE helicopter scenes of its own, it’s this one in “First Blood Part 2” that ultimately made our list.

In this film, Sylvester Stallone’s muscle-bound war hero travels to Vietnam to rescue American prisoners of war and expunge his criminal record in the process. Of course, things don’t quite go as planned, and Rambo soon finds himself being chased by a relentless attack helicopter. That is, until the explosive twist at the end.

This particular scene takes place before the opening title sequence and finds Bond in pursuit of a mysterious man in Mexico City. As the two men—and the pilot—duke it out in the cabin, the helicopter can be seen doing barrel rolls and backflips above a crowded plaza of people celebrating Dia de Los Muertos. By the end of it, the chopper—and your stomach—will have been shaken, not stirred.

Directed by the legendary Francis Ford Coppola, “Apocalypse Now” is undeniably one of the greatest war epics of our time. Starring the likes of the late Marlon Brando, Martin Sheen, and Robert Duvall, this movie takes place during the Vietnam War and follows a group of soldiers tasked with assassinating a renegade colonel in Cambodia.

While the opening montage—set to a hauntingly beautiful score by The Doors—also uses helicopters to great thematic effect, it’s the Ride of the Valkyries scene above that moviegoers will never forget. Its juxtaposition of a tranquil, calm-before-the-storm ride over the ocean with a chaotic, edge-of-your-seat battle above the beaches is what truly earns its title as one of the greatest helicopter scenes of all time.

Despite the film not having any significant helicopter scenes, it’s next to impossible to think of helicopters in cinema without hearing Arnold Schwarzenegger’s iconic line playing over and over in your head.

Did we miss any great scenes of helicopters in movies? We’d love for you to let us know!

PUT YOUR “CHOPPA” FIRMLY IN ITS PLACE WITH CHOPPER SPOTTER